What colour are my horse?

Forum rules
You can link to a horse using our new custom BBCode:
[horse=1234]Horses Name[/horse]
This will display the most recent photo of the horse as well as a link to him.
Post Reply
10 posts • Page 1 of 1

What colour are my horse?

I have 5 horse but I don't know the colours. Please help me.
Top

Bobbin for Blade is bay dun with appaloosa snowflakes and minimal tobiano.

Standing for Canyon is gray on a chestnut base.

Fire Breathing Spray is gray on a bay base.

Ribbon On Feeling is gray on a bay base. 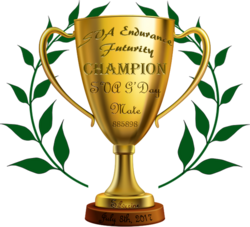 Thank you.
And how do you mark color genetics? Or is it worth marking?
Top

vihar20032003 wrote:Thank you.
And how do you mark color genetics? Or is it worth marking?

What do you mean?
Top

There is a link. Here's how black hair, brown horse, etc. are denoted.
And I saw horses for sale that were written like (E / e) (At) or something like that.
Top

Noting the base genetics isn't necessary, it's just something some of us use to help breed for specific colors. Each horse has two alleles (letters) for each color gene, one that it inherited from its mother and one that it inherited from its father. So when you see something like E/e that means that the horse has a dominant copy of that gene from one parent and a recessive from the other. When that horse breeds it can pass one or the other of those two alleles to its offspring, but not both.

To determine what genetics your horse has, you need to understand the basic color genetics. It also takes a bit of sleuthing, and understanding how the AC horses work.

Here's a run-down of the genes we see in the game:

Gray - G or g - Determines whether or not a horse is gray. A horse that is homozygous recessive (g/g) is not gray. A horse that is either heterozygous or homozygous dominant will always be gray (G/g or G/G). Gray covers all other colors, but does not appear at birth. Instead it spreads slowly throughout the horse's lifetime, usually starting with "goggles" around the eyes.

Extension - E or e - Determines whether or not a horse is red-based. A horse that is homozygous recessive (e/e) will always be red-based (chestnut, palomino, cremello, etc). A horse that is heterozygous or homozygous dominant will be black-based and may have bay, brown, or black as its base color (E/e or E/E).

Dun - D or d - Determines whether or not a horse expresses the dun gene. A homozygous recessive (d/d) horse will not display dun. A horse that is heterozygous or homozygous dominant (D/d or D/D) will display the dun gene. Dun turns chestnut into red dun, bay into bay dun, brown into brown dun, and black into grullo/grulla.

Some colors are easier to determine the genetics of than others. For example, if we grab a plain chestnut horse from the AC we know that its genetics are:
g/g e/e ?/? ch/ch d/d ?/? F/? r/r T/? N/?

The first set of question marks is the agouti gene. Because agouti does not affect a chestnut horse we have no way of knowing what agouti it is carrying. The second set of question marks is for the silver gene, for the same reason as agouti. Flaxen is labelled as F/? because the plain chestnut horse does not show flaxen, so it must have at least one dominant allele. But we don't know the second allele, because a single dominant would mask a single recessive. Tiger eye is labelled as T/? for the same reason. Cream/Pearl is labelled as N/? because it is clear that the plain chestnut horse does not have a cream gene, but could still possibly be hiding a pearl gene.

We can infer more based on the breed of the AC horse we chose. The AC horses only come in specific colors for certain breeds. Those colors are as follows:

North African Barb - all except gray - Barbs can be absolutely color EXCEPT for gray.

Shetland Pony - all except pearl or gray - Shetlands can be any color EXCEPT gray or pearl.

vihar20032003 wrote:Thank you.
And how do you mark color genetics? Or is it worth marking?

And... Silverine has struck first!!!
I actually kind of missed being beaten by you, Silverine!

It's only worth it, if YOU decide it is. I recommend learning your colors before you delve into the genetic coding. Genetic coding helps to determine what the foals will have when crossing parents, but it's easy enough to read the foals color when they blow it as a yearling.
For those unfamiliar with colors themselves, I don't recommend working with the genetic codes themselves unless you're specifically working with breeding a type of color. In that case, you'll still want to learn your colors first.

In the case of this one that you linked: id # 879392
This horse is being bred with confirmed genetic colors and as such, the foal coloration can be confirmed for certain characteristics before being matched with certain horses. In this horse's case, the brown color is the important color. Also, pangare is likely desired (also known as mealy). And to retain the brown color, chestnut is a no-go. So either double black, or single black is the important gene coding. Double black and single black is denoted as extension genes: E/E and E/e, whereas chestnut would be e/e.
So you see, getting into the coding side of genetics can be helpful, certainly, however, learning the straightforward colors first, certainly is the better and arguably easier point to tackle first.

Use the guide you linked as a first step toward learning the colors. We can help guide you to the differences of each, because on this game, we have such things as pseudo-blacks that are in fact chestnut horses. Like the example below. Thanks
It's very lot information. So I need the notes. xdd
Top
Post Reply
10 posts • Page 1 of 1

Return to “What Colour Is My Horse?”

Users browsing this forum: No registered users and 1 guest